The Ever Expanding Oeuvre of Steve Riskus

If you go to the American Society of Civil Engineers' Pentagon Building Performance Report, on page 14 is an image credited to Steve Riskus. Riskus mentions in a message board posting that "the American Society of Civil Engineers (ASCE) paid me $1250 to use my photo in one of there books and magazine." A problem arises here though, in that the photograph is not one of the 13 images that Riskus self published.

What does this imply? First, since figure 3.9 depicts later firefighting, it significantly departs from the timeline of his series taken in the immediate post-crash moments, and second, since outside of this sale, nowhere in the voluminous public record is there mention of any official contact with Steve Riskus--such as by the FBI--it calls into question the method and rationale the ASCE used in contacting him. Did he tell them he had other images after-the-fact? Whatever became of their original interest?

That the amateur photographer who was on his way to build a skateboarding pool on the morning of September 11, while stuck in traffic on Route 27 next to the Pentagon, witnessed the descent and crash of an American Airlines 757-jetliner into the 1rst and 2nd floors of the Pentagon building, jumped out to take a series of photographs, then raced home to begin posting 13 of them online within an hour and a half of the crash, to a web site registered only the day before, had addional images that he didn't make public, was already implied by the internal numbering of his images, found at http://criticalthrash.com/terror/crashthumbnails.html.

His self-published series of 13 begins at number 11 and runs to number 26, with numbers 12, 14 and 21 missing. The Wayback Machine still caches a copy of images he took down from the internet, number 12, a picture of his dashboard, and number 14, a photo of his arm, with number 21 missing, which may indicate that a photograph was somehow suppressed.

Riskus first told us, "I took these pictures seconds after the plane hit the pentagon. I was traveling on route 27 towards 395 when the plane crossed my path from the right about 100ft in front of me and crashed into the pentagon." He later changes that to "within 1 minutes," and drops the distance entirely, adding he left the immediate vicinity out of fear of further attacks--good justification for the fact that only five images are of the scene, with the remainder depicting his unnoteworthy drive home.

The image in question couldn't be of more relevance though. It is of the entrance hole the plane made in the facade, an image that most resembles the output of Cpl. Jason Ingersall, which begs the question why a high-resolution, government-sourced image of this critical data wasn't utilized for this most sober of reports. Given the resolutions the ASCE image is found in, it is difficult to question what motive might have led to the need for an image attributed to an outside source.

The volunteer citizen engineers of the ASCE, who were meant to draw the definitive analysis as to building safety, were in the absence of any NTSB report, also interpreting the mechanics of the airplane crash, but to do so they were provided with grossly deficient resources by the FBI, which is evidence of a coverup. By the time they were allowed controlled access two weeks later, all building and crash debris had been completely removed, nullifying any but the most obvious conclusions. 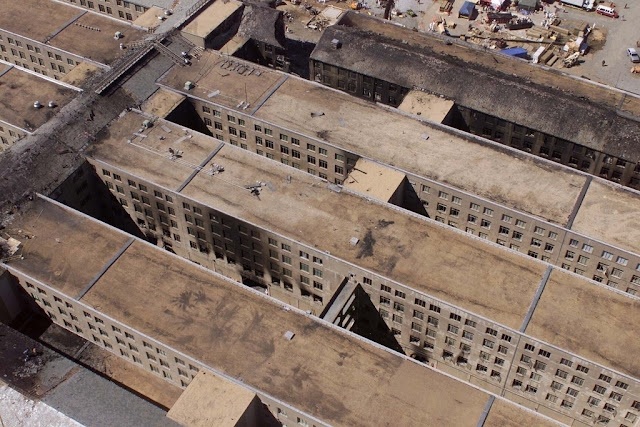 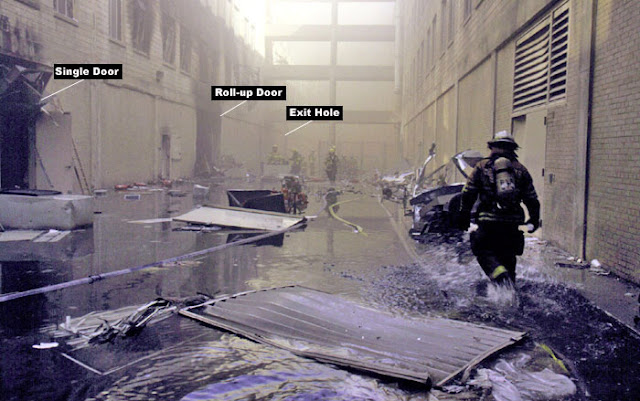 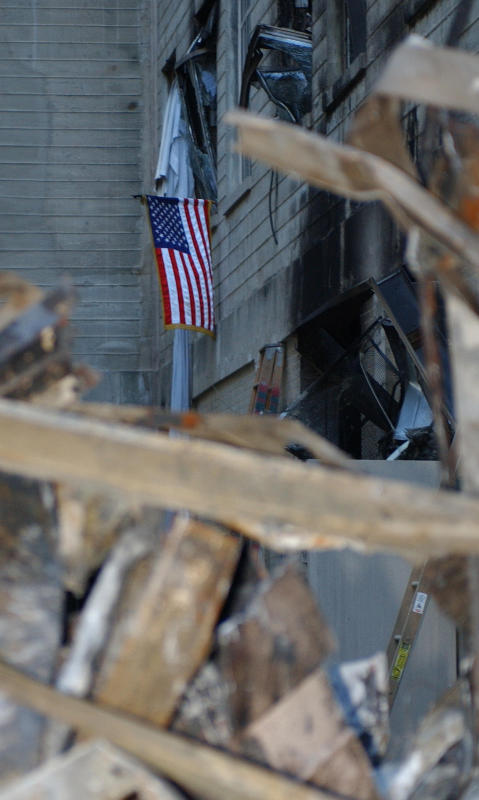 In the face of the damage depicted in the preceding and following photographs, it would be impossible or unethical to conclude, "With the possible exception of the immediate vicinity of the fuselage’s entry point at column line 14, essentially all interior impact damage was inflicted in the first story." But that is what the ASCE does. 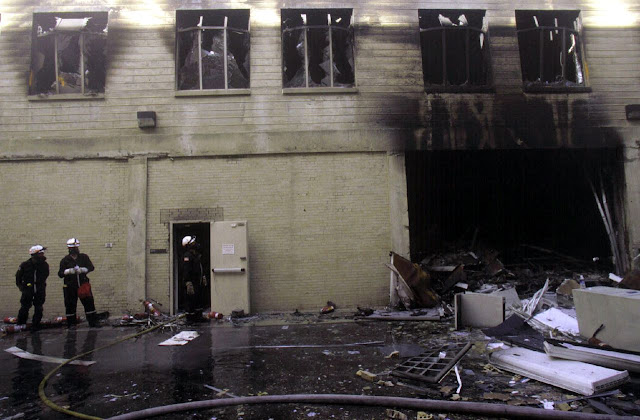 If the concussive overpressure that blasted these window frames outward wasn't caused by an airliner impact, it would have to be attributed to an explosive charge, because fire alone could not have caused it, just as fire alone couldn't have brought down the World Trade Towers.

We may never know who the guilty culprits are who staged the massive crime of 9-11, but in a nation of laws, we can hold those officials from various governmental agencies and departments responsible for the crime of covering up. Like semen stains on navy-blue Gap dresses, physics makes bricks and mortar evidence incontrovertible. And like Watergate--it wasn't the crime that tripped them up, it was the coverup.
Posted by StevenWarRan at Tuesday, May 29, 2007