May 13, 1976, AP - The Robesonian (Lumberton, NC) page 1, Former Nashville Newswoman May Have Been Counteragent For FBI, by William Morrissey,

May 13, 1976, AP - The Robesonian (Lumberton, NC) page 1, Former Nashville Newswoman May Have Been Counteragent For FBI, by William Morrissey, diigo, 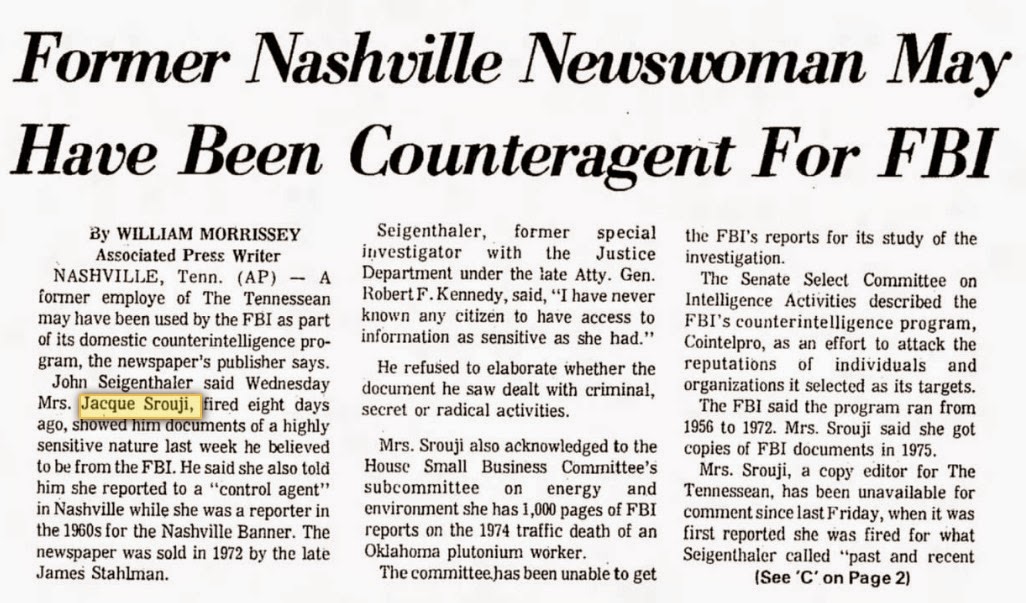 Former Nashville Newswoman May Have Been Counteragent For FBI, by William Morrissey,

NASHVILLE, Tenn. (AP) -- A former employee of The Tennessean may have been used by the FBI as part of its domestic counterintelligence program, the newspaper's publisher says.

John Seigenthaler said Wednesday. Mrs. Srouji, fired eight days ago, showed him documents of a highly sensitive nature last week he believed to be from the FBI. He said she also told him she reported to a "control agent" in Nashville while she was a reporter in the 1960s for the Nashville Banner. The newspaper was sold in 1972 by the late James Stahlman.

Seigenthaler, former special investigator with the Justice Department under the late Atty, Gen. Robert F. Kennedy, said, "I have never known any citizen to have access to information as sensitive as she had."

He refused to elaborate whether the document he saw dealt with criminal, secret or radical activities.

Mrs. Srouji also acknowledged to the House Small Business Committee's subcommittee on energy and environment she has 1,000 pages of FBI reports on the 1974 traffic death of an Oklahoma plutonium worker.

The committee has been unable to get the FBI's reports for its study of the investigation.

The Senate Select Committee on Intelligence Activities described the FBI's counterintelligence program, Cointelpro, as an effort to attack the reputations of individuals and organizations it selected as its targets.

Mrs. Srouji, a copy editor for The Tennessean, has been unavailable for comment since last Friday, when it was first reported she was fired for what Seigenthaler called "past and recent conversations with the FBI."

Asked if Mrs. Srouji might have been part of Cointelpro, Seigenthaler said, "I perceive that she probably was one of those people, but I don't have anyway to know. I would think if they went back in their records...that her informant role while she was at the Banner would have made her one of those people."

He said she had often been able to secure information for the paper on local stories involving the FBI.

"In light of what has transpired, all of us in news management positions must be alert to the possibility that FBI news sources may be in fact a two-way conduit through which the bureau may seek to raise questions about internal affairs of newspapers and conduct...of the people who work on newspapers," Seigenthaler said in a news conference.

"This, I think is the damage which has been [done] in recent months in Washington. It never occurred to me that it would effect me here in Nashville.

"She acknowledged to me last Tuesday and Wednesday that the FBI asked her, while she was reporting to them about other matters, about at least two members of this newspaper's staff....She said she reported only favorable items to the FBI about these staff members, but the fact that the questions were raised and she was in a position to respond to them led me to determine that it was not wise in the interest of the people who work here to continue her association with this newspaper. 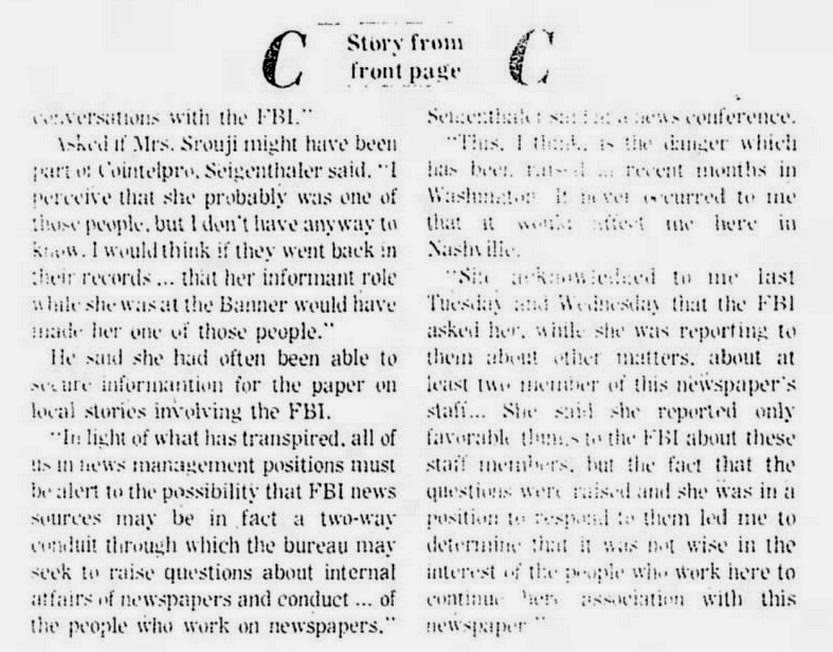 Posted by StevenWarRan at Tuesday, April 21, 2015 No comments: