Did the Pentagon Remove Anti-Missile Defenses In Advance of 9-11?

Hard to say, but in my opinion, yes, using as an imperfect baseline this 1960's-era Kodachrome aerial view. Clustered in the wedge furthest away from the heliport is an assortment of period electronic accoutrement, from antenni, to circular dish receivers, all of which quickens my period, James Bondish heart. 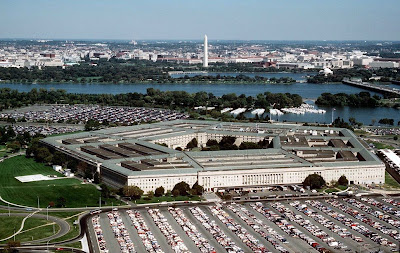 (This DoD photo attributed to Master Sgt. Ken Hammond is undated, but I notice in addition to the phosphorescent green of over-fertilized grass, there's no guardhouse for the parking lot, which must make it early, and the roofing is all of one color and era.)

James Bond was not the sensation on September 11, 2001, not that anybody got a good look, like witnessing the attack at the World Trade Center. What I did see at Arlington seemed fishy to me. Those half-used cable reels, left out in so prominent a position with six days to go before an official opening of the renovated wedge (actually, phased retenanting had begun back in February 2000, which makes the return of those tenants to affected areas an even more ominous, bi-partisan choice;) an "emergency" electrical generator, which Flight 77 supposedly struck before it hit the bottom third of the Pentagon, setting fire to the 2000-gal. fuel-oil tank, which is why 2000-gal. fuel-oil tanks are normally kept at a remove from air traffic facilities, all read as anachronistic set dressing to me. Meant perhaps, to waft us back in time, before digital, before analog even, to the time of vacuum tubes, when we might overlook the fact that here was military cake without any electronic counter-measure icing. 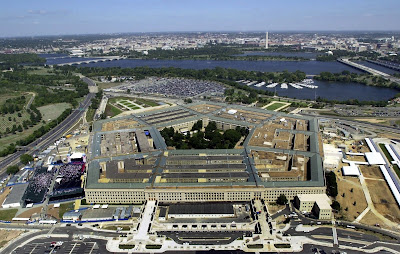 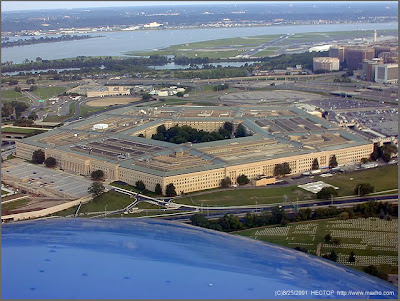 Who could've thought? Just a peaceful day visual approach to runway 15 at DCA

This shot also once had a higher resolution version available, which I hope turns up too. It is from a Russian-language web site of a pilot who just happened to be flying down the Hudson river on the morning of September 11, 2001 taking pictures. Somewhere, Maxho is said to be Max Hoffman, which I really should look into, but he gives good spook in any case, and since this photo bears a date just 17 days before the fateful September morning, I'm sorry it isn't telling us more like it used to. 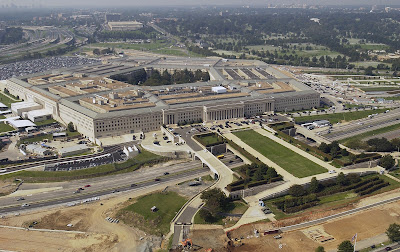 These two images click open wonderfully. They are of the vast landscape project, which eventually will surround the Pentagon and incorporate it into a monumental Masonic symbol visible from outer space (I'm just kidding!) 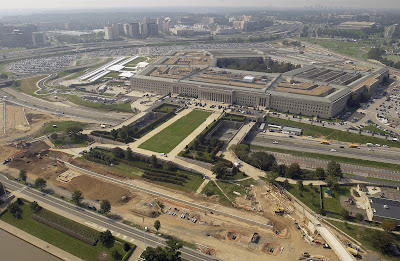 Most of the aerial shots taken on September 11 and its aftermath were of the truncated variety. While you may not agree with my view of what motivates the federal government's sinister manipulation of the public with such close-cropping, the attempts at limiting and controlling information "released" in photographs is a defining characteristic of all official photographs.
Download Hi-Res 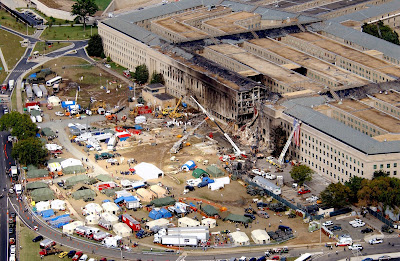 So, for the time being, the images below will have to serve as cock to the trigger of my theory's smoking gun. One shows the area where most of the obvious defensive and monitoring measures are. But it is the section to the top right, where light, geometric patches appear freshly exposed, as if something has been removed leaving vestigial outlines. It happens to be the same buff color found on the minor, low-rise transverse hallway roofs, which is how it escaped the notice of censors, I would imagine. 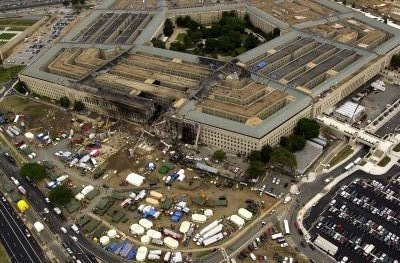 Not the light gray of the pitched roof along the outside perimeter and on the spokes of the major transverse hallways, nor the darker gray or tawny camel found on sections of flat roof from different eras, but the light-colored geometric areas, indicating where the original color has been preserved from weathering perhaps.

There! Somebody with a different set of experience than me can prove this theory right or wrong। Does roofing material of this kind lighten with time or darken? Either way, my point would remain the same: the utter absurdity of asking us to believe what our trillions of defense dollar spending wrought only the sorry spectacle of utter surprise and complete defenselessness on September 11th. 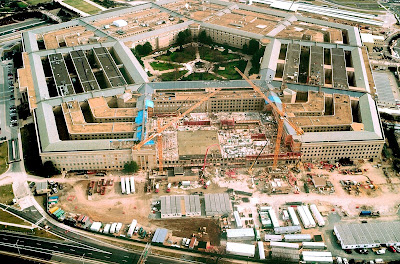