"The National Museum of Health and Medicine has unveiled an exhibit highlighting efforts used by its parent organization, the Armed Forces Institute of Pathology (AFIP), to identify the victims of the September 11 terrorist attacks at the Pentagon..."

But also unveiled, at least to me, is the name and job title of an Air Force photographer--U.S. Air Force Tech. Sgt. Louis Briscese, of the Forensic Photography Office of the Armed Forces Medical Examiner. 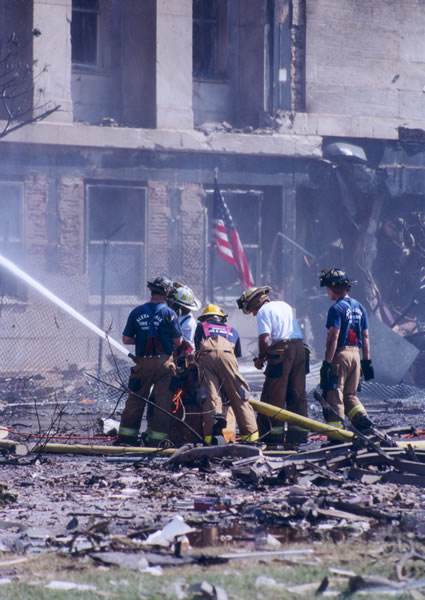 The title should read "Five anonymous co-conspirators pose for a propaganda shot beside an American flag while they shoot water onto an aviation fuel fire." 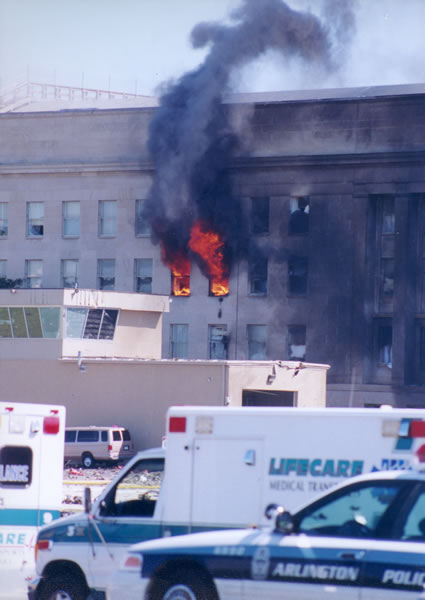 This photograph is titled, "Police and EMS equipment in the foreground at the Pentagon. Photo by U.S. Air Force Tech. Sgt. Louis Briscese, of the Forensic Photography Office of the Armed Forces Medical Examiner (AFIP.)"

Its title should read "Another generic shot of unattended fire burning with the foreground blocked. Taken around noon (check out the sun angle on the van.)"

How an army forensic photographer got onto the scene so early is one question. Why such banal images are being used in a medical museum exhibit is another question. Like Sgt. Thomas "Nate" Orme, one must ask when these men were called into duty and whether or not this represents clear evidence of foreknowledge.

Thanks to the comment left to this blog a month ago by a Californian named Kelly, we have a newspaper update sourced from Air Force forensic photographer Tech. Sgt. Louis Briscese. Fifteen years later and the tangled web they wove after first they practiced to deceive, just got more banal and sad. A part of their endless tapestry from hell.

And since comments left to my blog are usually excoriating, I have to thank ex-military members like Kelly for their integrity and common sense. Maybe it will brush off on the Catholic FBI and CIA.

Hello Steve. I'm not sure if you even check this page any longer, but I found it when I googled Tech. Sgt. Louis Briscese. There is a story about him and some pics he took in my local paper today, out here in California. I don't believe his story. I was in the Air Force, and him "leaving a mandatory dental appointment, grabbing his go bag and heading to the Pentagon DOES NOT MAKE SENSE! THEN HE SAYS HE WAS THERE 3 WEEKS? NO MENTION OF EVER TELLING HIS JOB WHERE HE WAS. THAT'S NOT POSSIBLE. AND A COP TOOK HIM TO THE PENTAGON TO TAKE PICTURES??? NO WAY! 
TRAVIS AIR FORCE BASE — Air Force forensic photographer Tech. Sgt. Louis Briscese took one look at the smoke rising from the Pentagon and knew where he had to be that day.

The photographs he started taking within an hour of the Pentagon being struck by a hijacked aircraft on Sept. 11, 2001, recorded one of America's darkest days since World War II.

"No one knew where I was at," Briscese said of taking the initiative to rush from an early morning dental appointment at Andrews Air Force Base to the Pentagon.

He was serving in September 2011 as a forensic photographer with the Office of the Armed Forces Medical Examiner photographing crime scenes, aircraft crashes and autopsies.

The office's personnel had already been involved in the investigations of previous terrorist attacks such as the Kenya bombings and the attack on the USS Cole.

On the morning of Sept. 11, Briscese went to a dentist appointment at Andrews Air Force Base. On the way there, he got a phone call from a colleague saying only something big had happened in New York City and that he was put on standby.

"When I walked out of the appointment, I saw people gathered around the TV watching," Briscese said.

He found it difficult to get off Andrews Air Force Base and soon got a call that something was going on at the Pentagon.

"You could see the smoke from Andrews," Briscese said.

The smoke was from where hijacked American Airlines Flight 77 slammed into the western side of the Pentagon at 9:37 a.m., causing one section of the building to collapse and punching through three of the building's five rings.

Briscese realized that the Pentagon was where he should be and managed to get a Maryland State Police escort to Bolling Air Force Base where he grabbed his "go bag" full of photo gear and then took off for the Pentagon.

"The (police) officer and I were the only ones going into DC while the other side of the highway was packed," Briscese said.

Briscese pulled up at the still-burning Pentagon and immediately started taking pictures of the attack site, which would soon be declared a crime scene.

"It was a big fire and there was a lot of chaos," Briscese said. "Several times, we evacuated because of planes flying overhead."

It was almost midnight before Briscese finally ran into a couple of pathologists from his office amid the crush of firefighters, rescue workers and military members.

"The Pentagon was still burning throughout the night," Briscese said.

It wasn't until the next day that Briscese was able to enter the Pentagon through an entrance near the crash site to take crime scene photos in the interior.

Briscese was so deeply wrapped up in his work at the Pentagon that it wasn't until he got a little downtime at home that he realized that the World Trade Center had also been attacked.

The main job soon became identification of the bodies of those killed in the attack and Briscese was moved to Dover Air Force Base on the third day, where his work continued nearly nonstop for the next month.

After the third week, Briscese finally started getting some real downtime.

Briscese said he realized that the attacks were just a beginning and there were a lot of changes in store for his office and for the nation as America geared up for its war on terror.

Fifteen years later, Briscese said it is good to know that his photography played a role in the investigation of the attack on the Pentagon and helped the families of those who died get relief with the identification of their loved ones.

"As a team, we performed remarkably," Briscese said of the overwhelming challenge of helping process the scene of the crash and later identifying the victims.


Really? So someone can SPEAK THE TRUTH by calling it an inside job, but I agree and my comment is deleted? Truth hurts that much huh?


My I agree comment is for @Time for Truth, since my last one was deleted.


To remember......Plenty of stuff out there, why do you have to come up with this bs. The more intelligent truthers feel dick set it up, it got out of hand and his and bush's involvement had more to do with the Saudi connections. What was their point? dick Cheney is a profiteering war monger he used bush. Probably meant to interrupt the thing before the hijackings, it got out of control before the govt could react. Look at THE FBI instigated terror attacks that were interrupted by the FBI just before they happened. The gay bar incident in Florida was one that got away from them.


To remember, this sounds like a load of bs, most " truthers"" feel that this was actually an FBI OR CIA entrapment that got out of hand. Like the bar shooting in Orlando, FBI handlers just weren't quick enough there. Cops shot a lot of people though. Look at how many FBI instigated terror plots were tried in the last few years. Agent finds a nut case then the disturbed individual gets tricked into doing something and gets arrested. Cheney is a war profiteer, bush was his dupe.


By all accounts, everyone in the building was surprised by a 757 that was flying around for an hour on radar and reported as hijacked?!?!. Something does not add up,