Somehow it Always Looked Bigger in the Lobby

John Quincy Adams Ward's bronze statue of Henry B. Hyde, unveiled in the ground-floor arcade of the Equitable Building, at 120 Broadway on May 2, 1901, on the second anniversary of Hyde's death, and which remained there until a fire and building collapse devastated the building on January 9, 1912, was then given by the Equitable Life Assurance Society of the United States in 1972 to the Metropolitan Museum of Art in New York City, where it remains not on view. It stands 21 inches in height, and otherwise measures seven-and-a-half inches by six-and-a-quarter inches.

Note the luncheon guests listed in the 2nd paragraph: 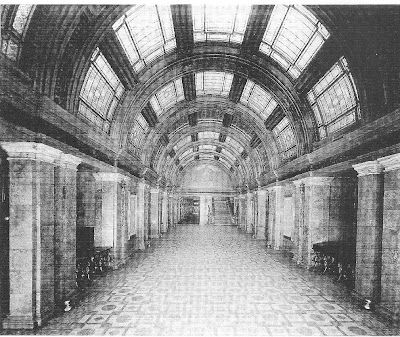 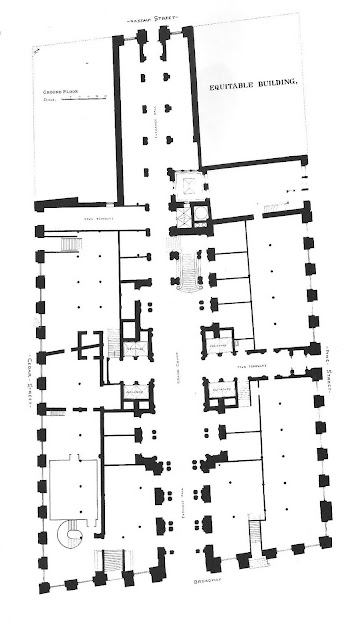 The above photograph was taken in 1912 by Edward N. Jackson. Joseph Caro's website, www.edwardnjackson.com, which supports his forthcoming book on Eddie Jackson, tells us that


One of Eddie's first free-lance photo opportunities before working for the American Press  Association, was the New York Equitable Building eight-alarm fire in the financial district on Pine Street in January, 1912.

Eddie Jackson had an instinctive eye for photo composition as these early pictures taken in the 1912 Equitable Building fire clearly show. With no formal training in photography or composition, Eddie shows us and his photographic peers of the era his ability to construct a photograph to a high dramatic level-even during the excitement of the scene as it unfolds. As Eddie Jackson stated later in life "a good photograph is worth 10 columns of copy."

Jackson went on to a distinguished career during WWI as personal photographer of President Wilson. Afterward, he worked for the New York Daily News, as an archive.org page tells us:


One of the first exclusive picture opportunities for the tabloid occurred on September 16, 1920. Captain Edward N. Jackson of the Daily News was on a routine assignment in Wall Street when a dynamite bomb in a horse-drawn wagon went off, killing thirty people and injuring a hundred. Jackson went to work, capturing the best pictures of the disaster. Other photographers soon arrived on the scene, but by then the police had already drawn lines about the explosion area. Jackson consequently was the only journalist to escape with on-the-scene pictures of the victims and first aid work. In cases such as this, history influenced the paper to cover the story, and the paper’s pictorial coverage augmented history by supplying pictures that would have otherwise never existed.

Jackson put it best himself perhaps:


Human history in its writing is fairly authentic – but I would offer that photographic history has an element of certainty about it that is indisputably authentic. The picture tells its own story – and proves it, is corroborative, and records details that are often lost in writing. Edward N. Jackson (1932) 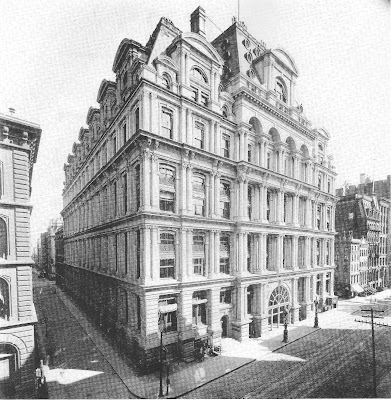 The fire and collapse at the Equitable Building on January 9, 1912, was an early use of a nearly identical template as was later used on September 11th, 2001. The eerie parallels between the two events point out the manipulated and false-flag nature of much of what we take to be organic reality, especially as it comes to the powerful, and those who record and serve them. 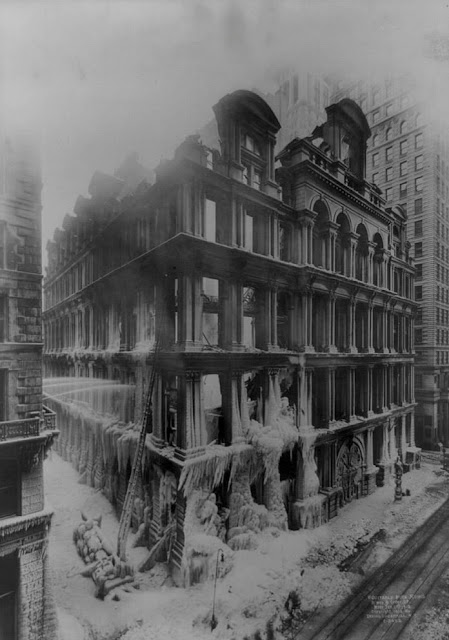 Posted by StevenWarRan at Thursday, July 28, 2011 No comments: