Daryl Donley: The Man Behind the Lens

(You may prefer a sequential Daryl Donley experience, in which case, please see my first Donley blog, then move on to my second Donley blog, before continuing here, but I encourage you to try and give it a reverse cowgirl if you're game!)

A video tape of a Library of Congress event, Capturing History: Photojournalists and 9/11, which was held on June 20, 2002, stars the amateur photographer Daryl Donley, who was at the right-slash-wrong place at the Pentagon on 9-11-01, together with a panel of four professional New York City photojournalists working on September 11, 2001, has just worked its way into my consciousness. The one hour and 37 minute tape will begin to play if you go here, and once there you can switch to Real Player for better control options. 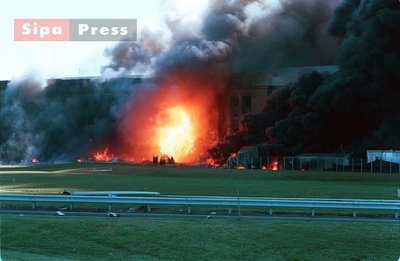 The program was sponsored by the Prints and Photographs Division of the Library of Congress, which purchased the 9-11 work of the five. The four professionals had their photographs showing together in a New York gallery, which provided easy, one-stop shopping for the L. of C. How Donley got discovered is a moot point here, although the moderator of the panel, Jeremy Adamson, risks asking the question "So how did your shots get into the media if you don’t have a media connection?" he fails to ask the same of himself: How Donley's Pentagon images wound up in the Library of Congress is the pink elephant sittting in the middle of the lecture hall., 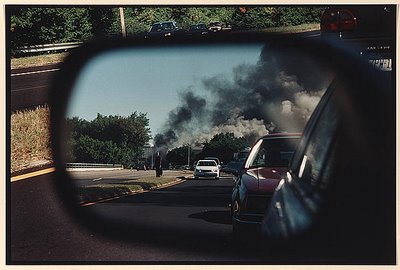 In any event, Donley is more rhinestone than zircon, especially when experienced amid a couple of diamonds shining forth from the New York contingent. Contrasted against the backdrop of images of real suffering and heroism, Donley reveals more than he intends. The three new photographs we see added to his previously known corpus of five, add absolutely nothing to our knowlege base, but are thrilling nonetheless to jaded old skeptics like me, who drearily click banal view after banal view.

I can't imagine how banality like that exists in the universe without getting sucked down a black hole. 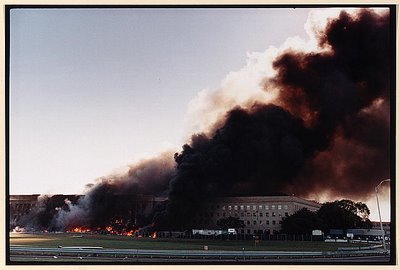 But the real revelations come from watching and hearing Donley in action on tape--my carefully rendered transcript is only a poor substitute. He almost loses it at the very start of his presentation, when even he doesn't take himself seriously, and again, at the end, when asked a question he's obviously prepared for, he flusters. But it's in his mindless rehashing in the middle that some very interesting logistical information sneaks out.

Hi, umm, before I show the images I’ll just briefly say, umm, as Carol has just mentioned, that I was in front of the Pentagon, stopped in the worse commuter traffic I’d ever experienced, before or since, and then heard a very loud plane, it got progressively louder, and it got so loud I ducked in my…(laughter)…is anyone out there? (laughs)... I, I ducked in my car it got so loud, and I turned to my right and the plane was next to me, umm, at an angle, at just above ground level, and I later realized it had knocked down lampposts next to me, and saw it fly into the Pentagon.

(Picture 1: Overview of diffuse fire with rusty guardrail in front)

So I’ll show you the first image and (question…you have the projector on?) yes, (laughter) there we go. This was the very first photograph that I took. Umm. What, what happened was I, as soon as the plane crashed into the Pentagon, and I, like everyone else, screamed a great deal, got out of my car, paced across the highway, a number of times, and then I realized I had all my camera equipment with me—I was going to photograph Senator Kennedy at the Kennedy Center that night unveiling a new exhibit, and umm, as I spoke with umm, other photographers, umm, Steve, who will speak later, umm, we both had the same reaction, of “I can‘t photograph this!” And the next thought was, “I have to.” So I went to my car, grabbed my equipment, I was shaking like I’d never done before, and had to load camera, film and batteries, and so my first photograph was about three minutes after the impact.

The thing that really shocked and amazed me was I do have some very nice equipment, I have a 100 to 400mm zoom lens, and I was at the maximum, umm, 400mm scanning the scene, looking for the plane, and could not find it. And, all I could see is possibly some scrap metal in the foreground, but I could only distinguish that later.

As you may know, umm, this was the side of the Pentagon that had a, renovation work, done on it, and from what I can tell, this is a generator that was fenced in the construction area, which is right next to the impact site.

Umm, this is the only photograph I really waited to happen, umm, this is the first emergency vehicle on the scene umm, I first photographed it in the distance, to the right, if you’re looking at the Pentagon, and since I felt like I was recording a sequence of events, I really wanted to firmly establish what happened and when, so I waited for the fire engine to come into the frame, and then shot it.

This is a secondary explosion, probably, , don’t know, probably another tank of fuel in the back of the plane and, it was probably about three or four minutes after the impact, umm, it is about 35 feet in diameter, the explosion goes up to the fourth floor, above ground on the Pentagon, umm, and, you can, I think, in another photograph, you’ll see something else I want to show you.

There’s now two columns of smoke, umm, I showed this to my cousin who was in special forces and he knew exactly what kind of jet fuel it was from the way it was burning and the color, and you can see in the top right the sun being eclipsed, also in the foreground, in a couple of photos, you can see the lamppost that was knocked down.

This is an emergency vehicle at the Pentagon that is for the heliport, where helicopters land, and it was decimated, there is a firefighter running towards it with a fire extinguisher.

Um, people began to evacuate of course immediately, umm, there was not…people were not running…they were moving quickly, and some people were actually walking slowly, umm, just because they were in disbelief and I could just tell, a major puzzlement: them not knowing what had just happened. This is looking north along, umm, Washington Blvd and Route 27, of all the pentagon employees and personnel evacuating, and cars stopped. Once we were stopped in traffic we were held there for at least ten minutes, and then when they were ready, they wanted us out of there as fast as possible. Also you can see in the road, possibly, all the, umm, debris from the Pentagon—there’s lots of cement chunks in the road.

This is, umm, again, the emergency vehicles all assembled, as, as the time went on, it’s to the right of the Pentagon if you’re on the roadway. Once we got cleared out, umm, once I picked up my camera I became a photographer, umm, and was looking at the scene as a photographer, always looking for the shot. And as we drove away, as we were moved out, I photographed some personnel on the side of the road, and then this shot caught my eye in the rear view mirror, and for me it really tells the story of the day and what happened to all of us, just a basic disbelief and shock of what has just happened, with the, if you can’t see in the back, there is a, umm, gentleman, a businessman with a briefcase, standing in the middle of the road, right in front of the source of the smoke in the distance.(Tape edited?) And thank you.(Scattered applause.

Jeremy Adamson: Daryl you were there at the Pentagon, your photographs were reproduced, Life magazine. How did that happen?

Well, I never wanted to be a photojournalist, (laughter) umm, I have always been passionate about photography, umm, I certainly admire and respect all photojournalists (snicker,) but its not something that I wanted to do, fulltime, so when, when I was, but I, if you will, was at the wrong place at the wrong time….

....or the right place at the right time....but first I just wanted to address this certain theme in photographing in circumstances like this, there seems to be a certain (inaudible) that “then something took over, and I’m a photographer,” there’s a certain distance that happens, it’s sort of like Tai Chi, practicing everything slowly but then all of a sudden when called to, everything is fast, but it’s comfortable, it’s automatic, you don’t think about it, umm I have been a photographer most of my life, umm, just in different contexts, so the moment I decided, umm, that I was going to photograph, then it was not about me, it’s about recording history and then all of a sudden I was a photographer and it was just automatic, umm, so, umm. I’m sorry....what was your question? (snicker)

Jeremy Adamson: (patting Donley’s arm) So how did your shots get into the media if you don’t have a media connection?

....umm, well....after, umm, I, finally....well, to cut to the end of the story, once I finally got home and was watching the news like everyone else, I remembered I had a friend who worked at the Gannett, newspaper, main office, so I called her with, umm, I called her and told her I witnessed what happened....concentrating....and she took down my account....starring off into the middle distance....and she brought me to her photo editor that Friday after I got the film back when the lab reopened, umm, and....hocus pocus—keep the focus!....from there it went to a photo agency and the, umm, images got published throughout Europe and made it into the Life book....nod..…nod?…....silence....I just want to add one thing too, that something that was very satisfying to me in the vein of recording this for history, I did get a full set of my images to the FBI, umm, I had contacted them through somebody else, and it was something I wanted to do, it took a while to accomplish, but umm, but I had noticed that one of the images, that was not up here—a close up shot of the entry point of the crash, that I noticed five week’s afterwards, that there was a person in it, and, umm, which completely horrified me, then I notified the FBI and got them a full set of photos and they said it would help with their investigation, so that was very satisfying, that, just in that decision to make, to take, the photos, that it would make a difference....nod....once we were stopped in traffic we were held there for at least ten minutes, and then when they were ready, they wanted us out of there as fast as possible. Once we got cleared out, umm....and as we drove away, as we were moved out.

What is Donley saying here? Don't try and read between the lines, just read the lines!

I'm editing in (on August 21) a juicy quote of Donley's from an article by Gary Wheeler published in Gannett News Service, on September 11, 2001, called "Witnesses: Airplane hit the Pentagon hard", The quote reads, “Another witness, Daryl Donley, saw the crash as he was driving on Washington Boulevard. Among debris that was scattered as the plane crashed, he found a "scorched green oxygen tank marked 'Cabin air. Airline use'" on the road.” The article has been apparently, suppressed 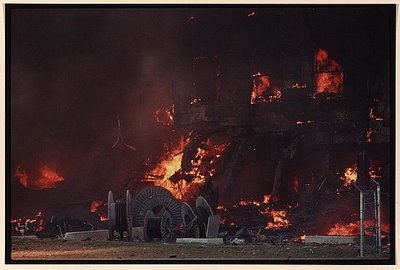 Posted by StevenWarRan at Sunday, November 19, 2006