In the September 2002, Library of Congress Information Bulletin, Vol 61, No. 9, in a section, The Power of the Image, is an article, On the Scene of Catastrophe: Photojournalists Bring Images of Terror to Life, by Carol Johnson, about a panel of photographers, included one amateur and four professionals, who took images of 9-11. Daryl Donley, the amateur, a Falls Church, Va., resident, captured the Pentagon in flames while on his way to work in Washington, D.C.

In a panel discussion, Donley was asked how he brought his work to the media's attention. Donley said he contacted a friend who works for Gannett who in turn introduced him to Life's photo editor, which is how his image of the Pentagon fireball was published as a two-page spread in a memorial book Life published.

But in an interview Donley gave his hometown newspaper The Observer-Reporter only two months earlier, on July 2, 2002, he tells a different story:

Back home, Donley called a friend at Gannett, a company that owns newspapers across the country. He told her his story and that he had taken photos.

"I knew what I shot. There was no mystery. I just wanted to be able to get them out and show people what happened," he said.

Gannett bought his photos and made them available to 100 papers across the country. "I never saw them in print, so I have no idea who used them," he said.

In April, he learned from a reporter that some of his photos were published in Paris Match and in the Daily Mail in London.

"Then this reporter from Paris Match, who was working in New York, tells me she saw one of my pictures in the book. I asked, 'What book?'" Donley said.

Donley is one of the eyewitnesses who attest to actually seeing a 757 fly into the Pentagon (Although, the Library of Congress piece reports only “he heard a low-flying plane and saw it crash into the Pentagon.”

His most widely disseminated report was on CNN: "I could see the windows. I saw the entire plane and then saw it fly right into the Pentagon." (CNN News Lexis-Nexis - Transcript #090803CN.V46)

The LoC article adds to the confusion by captioning this photo: 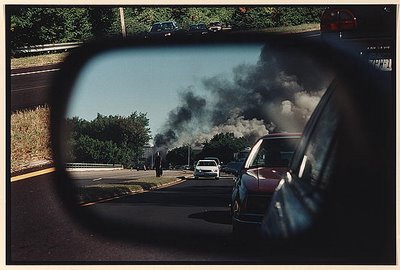 “Daryl Donley's first photo of the Pentagon in flames was taken through the rear-view mirror of his car.”

Which is impossible to reconcile with their narrative:

“Donley, the assistant director of operations for the National Symphony Orchestra, was the first photographer to show slides of his work. On the morning of September 11, he was driving past the Pentagon on his way to work. He heard a low flying plane and saw it crash into the Pentagon. Once he realized what had happened and regained his composure, Donley remembered that he had his camera with him. His first reaction was that he could not photograph the scene, but then he thought he must. He managed to pull to the side of the highway jammed with rush-hour traffic, stop, get out of his car, and use his camera with a zoom lens to capture the Pentagon in flames, within about three minutes of the attack.”

He would have had to cross over the median raced back through “heavy traffic,” stopped, regained his composure, and then snap the still-mushrooming pyroclastic fireball.

This in fact is Donley’s requiem. He can't hide behind the label of "amateur," when the route his pictures took to get in Life magazine and the collection of the Library of Congress, while bypassing the FBI, is itself newsworthy, especially when real photojournalists were being placed in handcuffs by the FBI when they got too close to the action at the Pentagon on 9-11. (DoD Briefing Q: Around that side of the building where the fire is and where the fire fighting's going on, I would appreciate it if you could intercede on behalf of the FBI to make sure reporters are allowed into a certain area there and allowed access in there so -- and not being threatened or, in fact, handcuffed and dragged away, that reporters do have an area close to the action where they won't necessarily interfere with things)
Two completely different stories, two months apart. You decide. http://www.defenselink.mil/Transcripts/Transcript.aspx?TranscriptID=1617 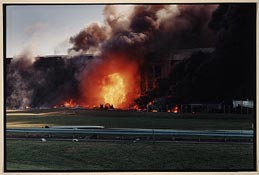 Posted by StevenWarRan at Wednesday, November 01, 2006