is a German-born, Italian-surnamed, and London-based artist who specializes in photographing sculptural still-life interiors. At the turn of the millennium, she served a stint with the Lower Manhattan Cultural Council’s World Trade Center Artists Residency program, which provided studio space on the 91rst and 92nd floors of the North Tower of the World Trade Center.

Her online Martina Geccelli Biography tells us that


Her project in this secluded building was dealing with vacant office spaces, which were called 'Suites.' Often left in a rush these spaces defined themselves by their markings. The spaces are in a stage of in between: moving out; leaving and restarting. The vacant space is still occupied. Geccelli is dealing with the topography of the space. The events of September 11th have in retrospect imposed on the readability of her work.

The LLMC published a book in 2004 called "Site Matters," that chronicles the residency program in the towers, which ran from 1997 until the their untimely demise in 2001. Geccelli's term from winter of 1999 through the spring of 2000, coincided with that of the most celebrated alumnus of the program---a collective of four young conceptual artists who went by the name of Gelatin. 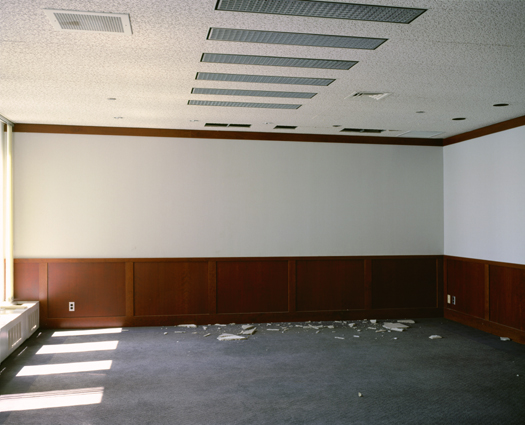 Suites 8203- Broken Panels, Martina Geccelli
All the artists who participated in the program were directed to work at interpreting the WTC site as a direct experience, which "raised compelling questions about the aesthetic, psychological and political aspects of the World Trade Center." Gelatin achieved a measure of fame in art circles with their plan to remove a narrow fixed window on the the eastern face of the 91st floor of the North Tower, then installing a temporary Juliette balcony, so they could step outside and enjoy a few moments of exhilaration.

Whether they succeeded in actually doing so is open to question. Moukhtar Kocache, the Director of Visual Art & Media for the project, wrote a letter to "categorically deny and refute Gelatin’s (the Austrian art collective) preposterous claim to have removed a window and installed a balcony from the 91st floor of Tower 1 in the World Trade Center," Describing them as pranksters who "thrive on shock value and attention," Kocache exclaimed that "[n]o one in his or her sane mind would believe such an account!"

However, during a FEMA-sponsored symposium in early 2002 addressing the damage and art losses from the September 11th attacks, Kocache took an opposite tack, describing as art


The wad of red chewing gum that performance art group Gelatin had stuck outside the building on the 91st floor after removing one of the windows, signing or marking the building from the outside, this is an art work that's also gone.

So much for a shared concept of sanity---let alone artistry. 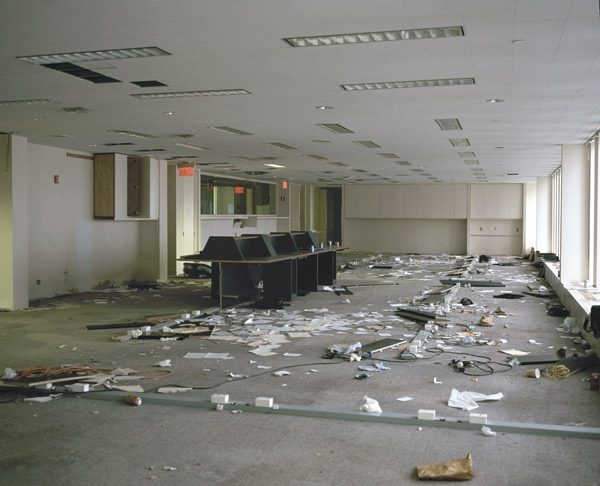 Suite 4047 - Looking out, 2000, 125cm X 100cm, Martina Geccelli
What Gelatin's project accomplished with its daring-do, Geccelli achieved through her sedate political consciousness. It can't have been easy for the program's participants to repay the generosity of their hosts with an ostensible focus on the World Trade Towers as their artistic object. Although I haven't read the book yet, much of the art I've heard described sounds contrived and forced to my ear. 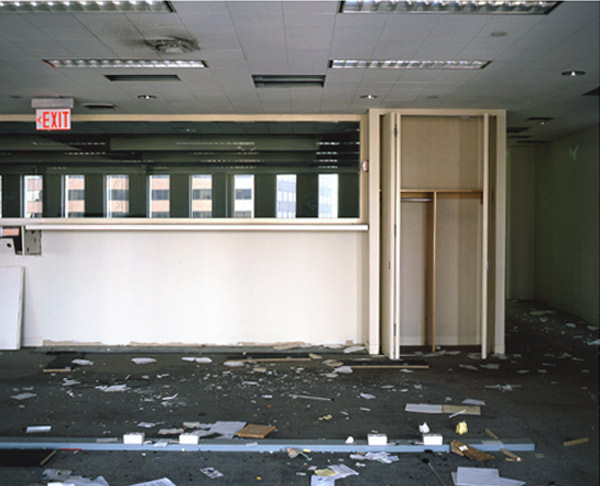 Suite 4047 - Reflections, Martina Gecelli
But not so Geccelli's, as evidenced by my finding online a body of her images taken in the emptied and abandoned floors of a outmoded tower just awaiting its fate. Could she have known what these interiors would portend? Speaking from the perspective of international business and trade, how many other unprofitable floors was she aware of in this downtown office building? Did she appreciate that her own presence on the 91rst floor was liminal, and what it signified from a capitalist standpoint?

Did she know that David Rockefeller and Chase Bank had founded the Lower Manhattan Cultural Council 30 years previously to stimulate development downtown, and that he continued to fund it with millions of dollars every year? 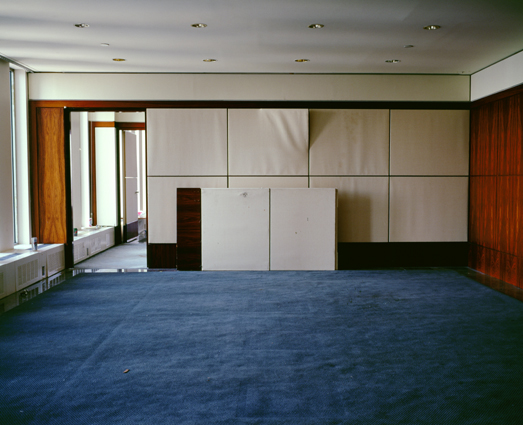 
Martina Gecelli, who in the year 2000, photographed abandoned office spaces at the Trade Center that were left in complete disrepair. For Martina, the architecture, the space, and the psychology of the space became her subject matter. 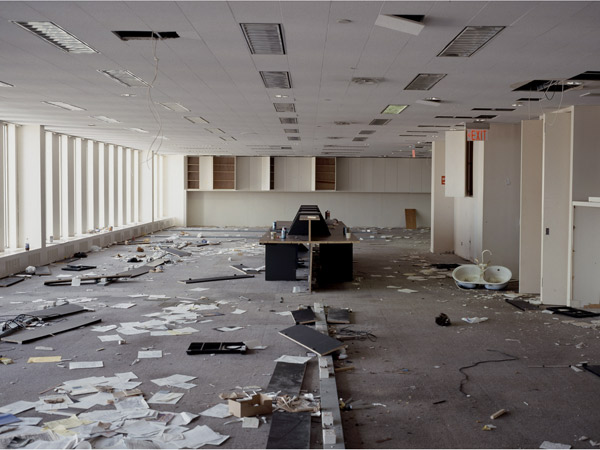 Suite 4047- Long View, Martina Geccelli, 2002
By "psychology of the space" do you think she means appreciation for the underlying truth behind the reality being presented? The Trade Towers had been emptied in 1993 after a clearly preventable act of terrorism occurred---had the FBI agents who were guiding the "perpetrator" only chosen a different outcome to that "conspiracy." But that result was necessary in order for the next planned outcome to unfold.

The signing of these leases fell within the design parameters of a secretly planned false-flag terrorist-attack exercise/operation upon the trade towers. They represent the ground work, and then the green light that the plot was good to go.

Cantor Fitzgerald had fired several hundred of their supernumerary voice-bond brokers in advance of the 9/11 hit---some of the floors they leased atop Tower 1 must have looked similar to these here, having been stripped of both human occupants as well as emptied of their famous Rodin bronze tax writeoffs. 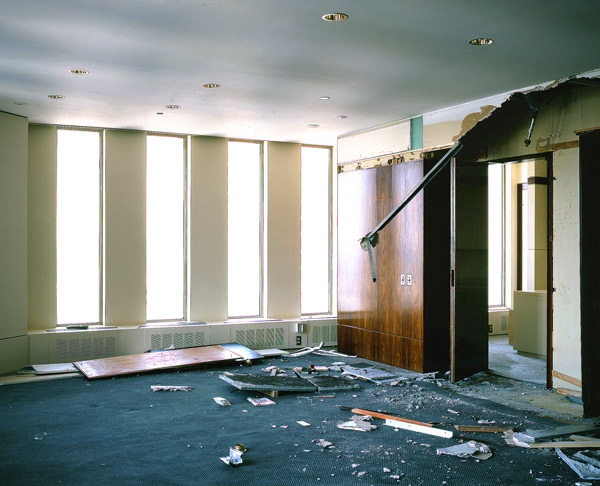 
The uneven setting, the place of somehow 'in-between,' are the zones of focus. She was interested to catch the facts of the changing and shifting environment. With the camera she documented urban settings behind the official thoroughfares. The little addition around a space, the twist in a smooth setting, the improvised, those locations are representing the every day urban life. 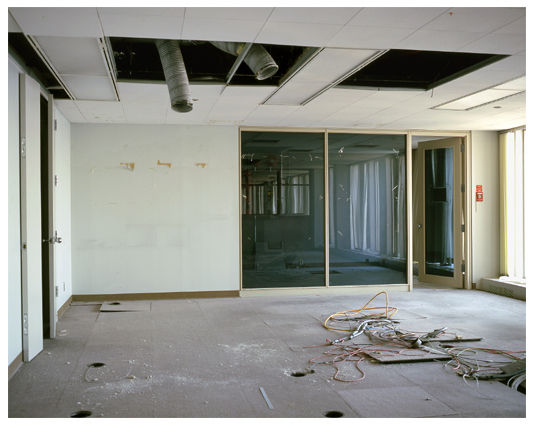 Suite 8203 - Cables, Martina Geccelli, 2002
Despite the damning message these pictures carry to her nominal benefactor, Mr. Rockefeller, Martina Geccelli has earned her reward by creating beautiful images "in this secluded building," which serve a higher power then David's---not that there's anything wrong with him. It is a "suite" force, which I'll loosely describe as being the combined manifestation of truth and justice.

Indeed, "[t]he events of September 11th have in retrospect imposed on the readability of her work," but I chalk that up as proof she conceived outside the conspiracy of dunces who at present, are still calling the shots. I thank her for letting me use her work to make my point, with a creative attribution of course, but without her express permission.


There were no planes,
and no jumpers.
There were no victims,
innocent or otherwise.
No bucket brigades either,
since debris was lacking,
for reasons unknown.
And the "pit" became the "pile."
Searching at Fresh Kills was staged
for the cameras and the overtime.
The heroism was a joke,
and any suffering a lie.
A managed farce,
where nobody worked,
just nobly posed about in images.
The whole story is a mess,
badly told in the media,
by monsters accustomed to
having the upper hand.
Their burns would prove to be minor,
and self-inflicted anyway.
Even the dogs looked confused
and it's no wonder.
Received October 26th, 2011:


I have noticed you have published an article about myself and my work ( World Trade Center- Photographs) on your blog on
12/01/2010.
I have never given you permission to publish an article on my work and details about myself. Also you state a poem in this context- looking as it is written by me. This is incorrect and false. This wrong informations are now falsley used by other bloggers.
I have nothing to do with that poem. I do not like to be seen on websites or blogs of which I do not share any opinion in any way.Your article does my work and my person harm. I like you to remove all parts of that article which are in connection to my person and my work - in word and image.
I am an artist and do not like to see my work being used for the wrong purposes.

Please follow my wish as you have no legal rights to publish anything without my permission.


Critics don't need the "permission" of "artists" to produce criticism about their work, anymore than artists' private emails to said critics need be treated in some privileged fashion. Her art consists of the original prints of photographs wherein she controls the negatives and reproductions. I merely reproduce copies of the copies which she self-disseminated on the internet. This reproduction is wholly noncommercial, and given the broad public interest paid toward the arrival at the truth of the attacks of September 11th, 2001, would seem to fall well within the editorial provisions of the "Fair Use" law.

In fact, I would claim, I've created a new work of art, incorporating pieces of her imagery, which thus transforms her art into a new context revealing a deeper, more resonant value than she may have originally intended---thus, I may even be the better artist.

If Ms. Geccelli cared so deeply about personal control of the images she took of the interiors of the World Trade Center in advance of its destruction, she could have posted said images in any of the proprietary and protective formats which prevent the copying and pasting of images "found" online.

And most importantly, if she were any friend of the truth, she would stop hiding behind the canard of possible "misunderstanding" of her, or my work. Nowhere do I claim she authored a poem, and in all fairness, comments to this blog clarify the fact most clearly. We have no right, nor ability to control, what others do or say regarding our output.

Ms. Geccelli may have better luck contacting Google Blogger directly to have her images removed from this blog. Others have done so successfully despite my opinion and objections. However, the issue is now larger than the sum of its parts. She will not be able to remove the discussion of the work at hand, a discussion which she has joined in on. My personal advice to her would be that she examine her motives and agenda. She won't be able to rollback what art has begun.
Posted by StevenWarRan at Wednesday, December 01, 2010