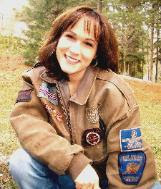 Hi! My name is Lynn Spencer! And I am a professional airline pilot! I live in Virginia with my three children (Caroline, Brigitte and Chase) and our cat, Felicity. Chase is only three! He'd be no competition for you!

My greatest passion Ah. is airplanes! And it has been since I was a small girl! Growing up, I had always loved airports and airplanes...but I also assumed that everyone else did, too. It just seemed a very obvious and natural thing to be passionate um...didn't I just use that...about. I first realized that my passion what! for airplanes was not typical was when I was in elementary school and visited Washington, D.C. with my family. We visited all kinds of museums and monuments, but what I remember being the most excited about was walking the national mall (where all the monuments are) and watching all the planes flying low overhead as they came in to land at Washington's National Airport. It was awesome! It didn't matter where we were or what we were looking at, I would have to stop and watch every single plane...and identify it for my family. This may have been amusing to them at first...but after the first dozen or so planes, it quickly became annoying. Eventually, my brother Gregg threatened to tape my mouth if I said another word about a plane. But I was in heaven and I could have just sat there all day watching those planes fly right over my head. pun intended!

But, the moment when I knew that I had to be a pilot came several years later when my father took me to an EAA (Experimental Aircraft Association) Air Show in Osh Kosh, by Gosh! Wisconsin, when I was in 6th grade (I'm a big girl now with pig tails!) I liked all the planes . . . but the jets really got my attention, and when I watched the demonstration flight for the F-14 Tomcat, Meow Sweet Pea! I was hooked. I wanted to fly jets . . . military ones preferably. I pestered my father I know! Bad choice of word! endlessly about flying lessons after that air show, and finally he relented, and told me that I could take flying lessons when I turned 16. That was enough for me and I just waited for that lucky birthday and said no more. Unfortunately, when I turned 16, my father did not seem to remember ever having had such a conversation. He had little interest in paying for flying lessons and thought that flying airplanes was not an appropriate career choice for his daughter. I was disappointed, and have carried the resentment to this very day, but I tend toward Dispensationalism, I mean, determination, and I figured I would just have to go to the Air Force Academy with all the other uber-Christians. They would teach me to fly fighters. When it came time to apply to colleges, my hard work had paid off. I had earned all A's in high school and stood an excellent chance at acceptance into the Air Force Academy. Oh silly me! I forgot I would need to secure a nomination from my member of Congress! Dang!

But, times were different in the early 80's. When I applied to the Air Force Academy, they told me straight up that as a female--and a female that wore (corsets) contacts--would never fly their fighters. The best I could hope for (if I got lucky) would be to navigate reconnaissance. I was so disappointed. I knew that I would never be satisfied working the radios in some pilot's back seat (Calling Dr. Freud. Calling Dr. Sigmund Freud.) It seemed that I was never going to be a pilot.

My high school counselor did not seem to know of other options for becoming an airline pilot, Resentment List #2038. so (I figured that I would just have to settle for flying small private p)lanes at some point in my life, and I turned toward a more realistic plan: pre-med studies. (?) It was not until age 28 that I realized that I had let a big part of myself die when I gave up my dream of becoming an airline pilot. (That's it! Nothing to do with med school.) One day, I met an airline pilot and shared with him my dashed dreams of flying airplanes and attending the Air Force Academy. He told me that I could still be an airline pilot even though I had not pulled a train, I mean, gone with the military. There were flight schools to teach people how to be professional pilots to be found on the backs of match books. Two weeks later, I was enrolled in Private Pilot Ground School. The week after my first ground school ended, I started flight school full time.???????? This was no easy task because I was a single mom by this time read: available. I was so nervous, but so excited. I need a clause here. "I almost peed myself?" In eighteen months, I got my Private Pilot Certificate, my Instrument Rating, my Multi-Engine Rating, my Commercial Certificate, and then my Certified Pole Dancing Instructor Certificates. I was now a professional pilot! It was such a joy to be earning a living teaching others how to fly planes. Well, that's what 250 hours buys you!

I spent three years flight instructing and flying corporately [text alert] until I was hired by "an airline" in 1999. Airline flying is wonderful! I work for a great company and I have been able to combine my flying with my children ("pay no attention to that man behind the curtain!"). During times it was too difficult to be away from home, my airline allowed me to work in the training department. There, I was home every night, but around planes and pilots all day. Can't beat that! So why the fuck would I want to write a book, you may ask?

As an airline pilot, I fly 3 days per week. I am away from home 2 nights per week. To be honest, those two nights are a nice break to my week. I come home refreshed and renewed reverse double-entendre cowgirl with a backflip. I fly all over Mexico, Canada and the United States. Some of my favorite lay[over]s, are Boston, Charleston, Palm Springs, Ontario and Colorado Springs. Sometimes passengers think I am their flight attendant, but that is getting less frequent as they grow more accustomed to women pilots.

One time, an elderly couple started to argue about whether I was the pilot or the flight attendant. The man had asked me for some coffee when I had come into the cabin. His wife and nudged him in the arm and said, "She is our pilot!" He responded, "Of course she is not our pilot! She is our flight attendant!" I was standing right there happy to clarify this for them, but they just kept on. She was showing him the stripes on my shoulders and my wings. Finally, he said to me, "Would you explain to my wife that you are NOT our pilot just because you have wings and stripes?" I had to apologize to him as I told him that I was indeed the pilot. I quickly returned to the cockpit after that!

It is at this point you will have concluded that I am just a mass of unhealed resentments and passive/aggressive codependency. Did I say I wasn't going to be high maintenance pooky? You want me to work on my personality?

The Captain and the First Officer trade off flying every other flight. The Captain sits in the left seat and the First Officer in the right seat. It's really no wonder the Muslims hate us. When I am not flying, I am working the radios. It might sound funny, but I enjoy both. I have always enjoyed the "pilot talk" on the radio. It's like its own language and I always thought it was pretty cool to know the lingo. Tell me about your "call signs" again, Sweetest Pea. A good memory helps, because you get some long clearances that you have to read back. (For example, "Jetlink 4348, turn 300, maintain 180, cleared for the ILS 27, contact tower at 118.7.") You have to repeat that back. Taxi instructions sometimes get really crazy . . . so I will have a pen handy!

My favorite part of flying is bringing the thrust levers forward on the take-off roll and feeling the airplane accelerate down the runway. (You catch my drift, don't you, race horse?) It's a great feeling! There are a lot of benefits to being an airline pilot. First, I am getting paid to do what I love, so it really does not seem like work. Second, I do not have to be in an office at a desk every day from 8 to 5. Instead, I travel all over and only work 11-12 days per month. That's a lot of time off!!! Ummm...are we going to start talking about non-fiction writing any time soon? Lastly, as an airline pilot, my family (and my parents) get free passes to fly anywhere in the world for just about free. I think I love this the best, since I love to travel and explore. My parents thoroughly enjoy the travel benefits and so do I.

I am a big believer in following your dreams and making them yours, and another of my dreams has always been to write a book. So in 2005, I took time off from flying to write a book called Touching History: The untold story of Bangkok Massage Parlors, I mean, the drama that unfolded in the skies over America on 9/11. I have traveled around the country talking to airline pilots and fighter pilots and FAA managers and military commanders about this tragic day in nation's history, but a very incredible and heroic day in aviation. It is both an honor and a privilege to be sharing their stories, and I have thoroughly enjoyed the process of writing a book. Yet, I miss my flying tremendously and look forward to returning to the cockpit soon. I bet you do sugar.

To all the girls out there, if you love airplanes and flying, then DO IT! Don't let anyone turn you away from this dream. Flying airplanes is an incredible and rewarding career, and it can and does work with having a family. My kids say that I inspire them to follow their own dreams and I can only hope that is true. Find your dreams and make them yours! ??????? Is it me? Have the courage to take a chance and make a change and choose your destiny. You will never regret it.

(This has been reprinted from MyPage at www.girlswithwings.com) [with a little help from my reds]

Lynn Spencer
Pilot/Author
Touching History: The Untold Story of the Drama that Unfolded in the
Skies over America on 9/11
www.inspirationalchristiannonsense.com
Posted by StevenWarRan at Thursday, June 26, 2008