Ray's Pizza, Around the Corner From St. Vincent's Hospital

I post these post-9/11 images of the missing-persons leaflet-laden facade of the famous Ray's pizza establishment, on Sixth Avenue and Eleventh Street in New York City, as a proof of the false and synthetic nature of the "craft op" that this "spontaneous," middlebrow "family member" endeavor really was. Too bad they couldn't have incorporated some scrap-booking in as a sub-plot. It would have played to their obvious strengths. 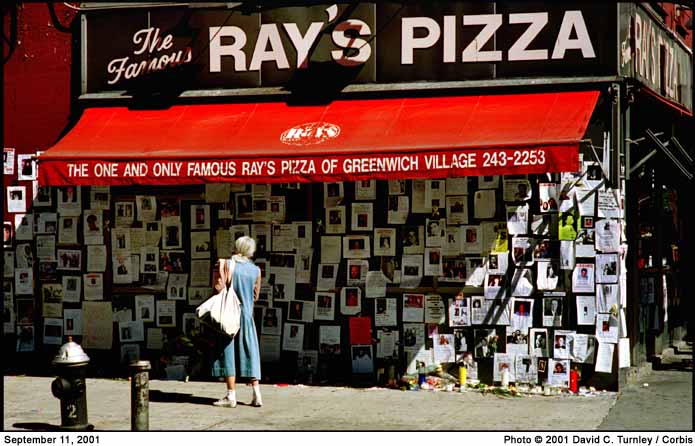 Could this image really be dated to 9-11-01, Mr David C. Turnley? Wouldn't it have taken some time---hours and days, I mean---before families would begin to branch out from the locus of family assistance centers and the hospitals? Or is that shadow line trying to tell us it's dinner time, and we have 200 hungry victim relatives inside? Is there a way for Turnley, or Corbis to fudge the situation now? 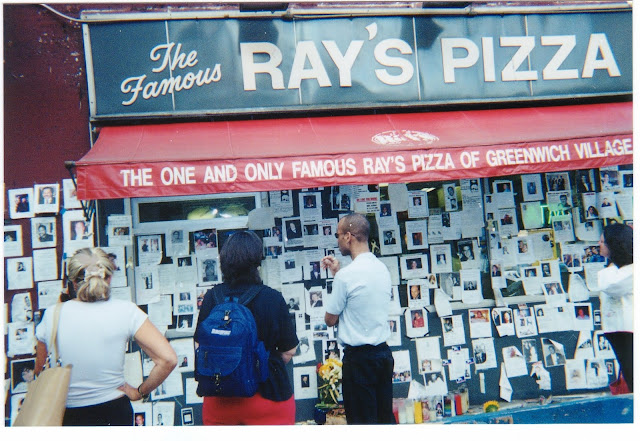 There is no particular reason for individual posters to have congregated their fliers into such a visual massing here. This was not some center, like a hospital, or government office, or public square setting, where word-of-mouth could reasonably have lead a leafleter into participating in groupthink. In fact, some separation would help a poster to stand out in the crowd and be noticed. Imagine yourself as one of the final posters, putting up his last flier here---would you really have infilled your message down in some space on the bottom row? How else was the overall "look" created?

What's wrong with a nice eye-level bus shelter down the block? We aren't intending this communication to be with other family members, dining as we do---and we have no need to corral the news media, that is, unless we are being unduly selfish. And do notice the mesmerizing fare being offered at the time on the premium channel HBO! 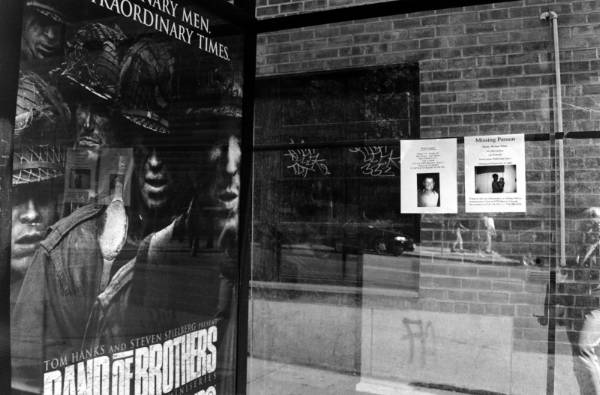 In addition to this basic logical fallacy in the underlying narrative structure, evidence also appears for some fraudulence and photoshoppery in these images. Why, for instance, is the next image different then the previous two---with the color register being so off, and the awning rolled up? 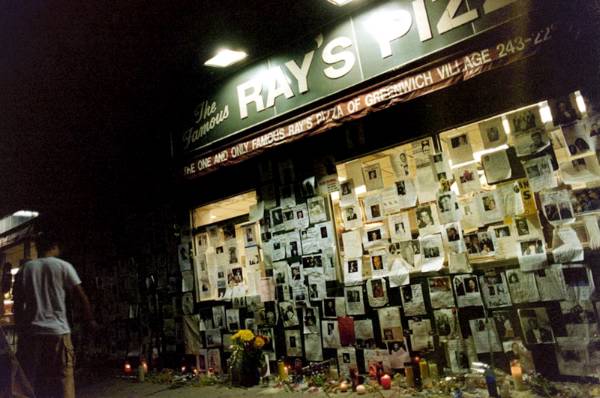 In New York City, security gates are raised and lowered each day, but old-fashioned movable awnings are never manually adjusted, in my experience. They are left either retracted or extended---as a statement---both night and day, rain or shine.

Why does the image below have an ATM sign prominently displayed high up at the corner, which is not seen in the David Turnley/Corbis image above? The "We Are Stronger Now" placard on the sidewalk is reported to be a fixture in the subsequent missing-persons-posters museum tour, which took place in 2002. 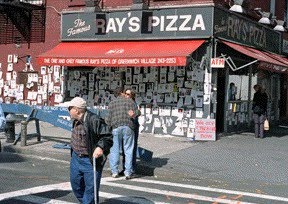 Ray's Pizza photographed by Bronston Jones, who is one of two men who organized that brief nation-wide museum tour displaying the missing posters---the men who collected or created all of the material, and personally own it outright.


"Ray's Pizza, located on 11th Street two blocks from St. Vincent's Hospital, became a popular place where anxious families went for a quick meal as they waited for ambulances to arrive with survivors.

"Adjacent streets were barricaded by police to automobiles creating a pedestrian walkway where fliers were posted on lamp posts, mailboxes, buildings, trees and fences.

"As the days wore on and no survivors were found the hand written message, 'We Are Stronger Now' became a statement of defiance for New York, and the nation."

Nobody did any "waiting for ambulances to arrive" anywhere after the first hour or so following the attacks, nor did anybody wait here especially---that is if they were running around town putting up as many as 1000 posters as was reported for some victims. Don't you remember this List of Hospitals Contacted, posted on the Smithsonian Institute's website as a sample of an average experience, which followed from that day? 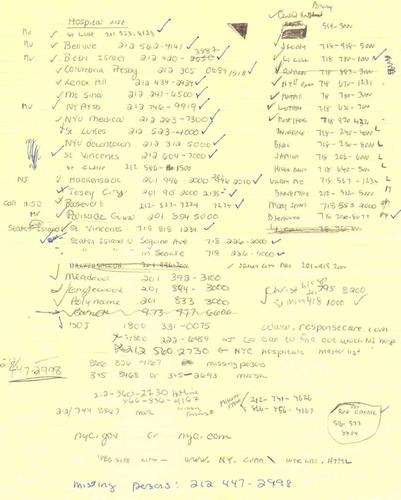 And it wasn't the adjacent side streets that were barricaded to automobiles---it was the north/south avenues, blocked off at 14th Street. Saint Vincent's Hospital is on Seventh Avenue---a long block away from Sixth Avenue---without much crosstown traffic being generated. Were any restaurants on Eighth Avenue papered over as well, for, um, geographic balance?

I found the next three images of Ray's Pizza over at http://www.sarj.org/worldtrade/index.htm. the odd web site of a couple, Rich and Susan Hanson, and the images seem specifically designed to tone down the over-the-top, down-to-the-sidewalk quality of the Turnley 9/11 image. They are dated 9-14-01; they first went online on April 13, 2002. 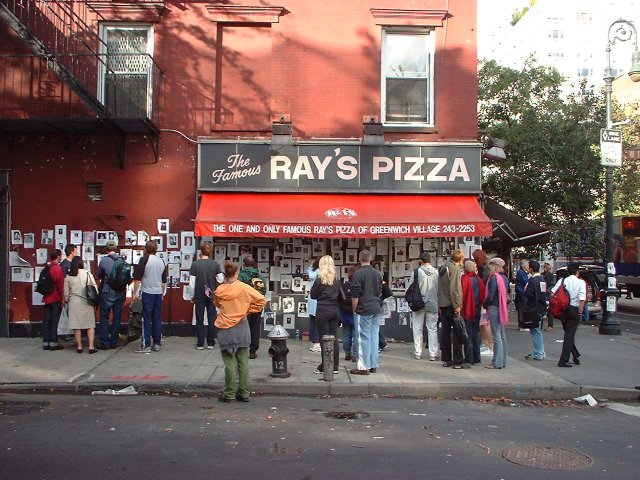 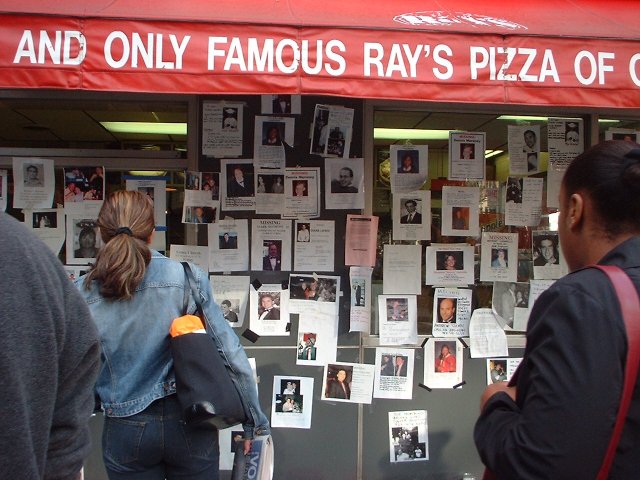 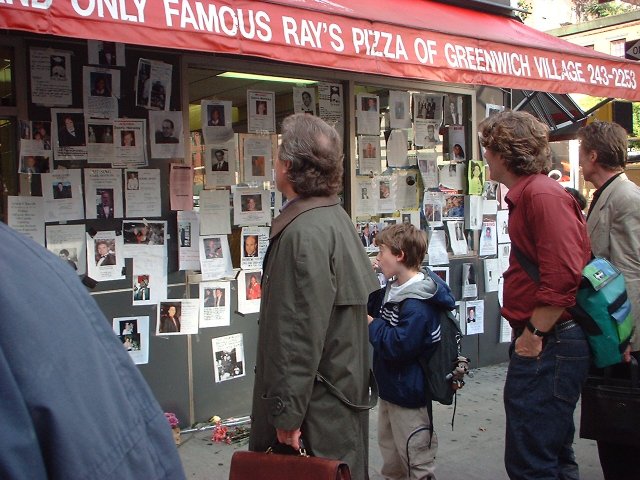 Somebody's Flickr image of Ray's Pizza in quieter times, with the awning rolled up, and what appears to be an identical ATM sign, which leads me to believe that anything less is more doctored. 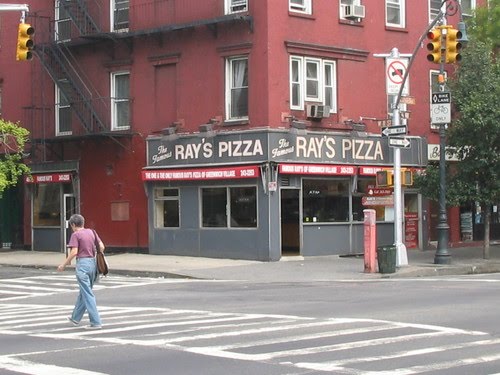 The image below is of Nino's Restaurant on Canal Street in lower Manhattan on September 18, 2001. The restaurant devoted itself to feeding the rescue workers, according to published narratives. So it makes some sense to see leaflets and fliers pasted over the glass windows here, but not fully blocking the sunlight like at Ray's---a public establishment many blocks north of the crisis atmosphere. There comes a point at which posting fliers on private property becomes uncalled for---worse than littering, especially under the trying circumstances following 9/11, when I would have thought everybody was motivated to be on their best behavior, to work cooperatively, and think of others.

Somebody named bristahsouljah has some wonderful images over at Flickr, but they're weird spaceball GIF's, which I can't download or hotlink to. This is a great, clear image of the northern windows in the pizzeria pasted over, but it is difficult to reconcile the look of things here with the Turnley and Jones images above.

Similar perhaps to this bristahsouljah image, where obviously maddened family members have swarmed all over a news truck, placing their posters on the windshield and the windows, reminding us in the process of the locust plague in Pearl Buck's The Good Earth. But this also lets us know that the conspirators have badly overplayed their hand in the enterprise. 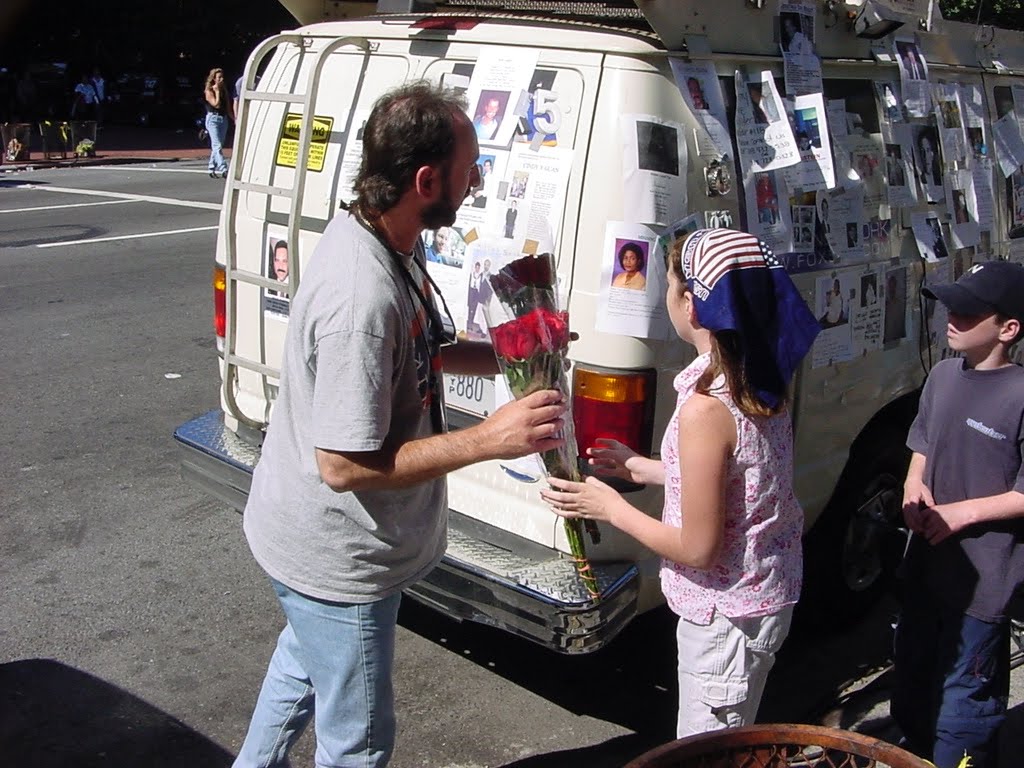 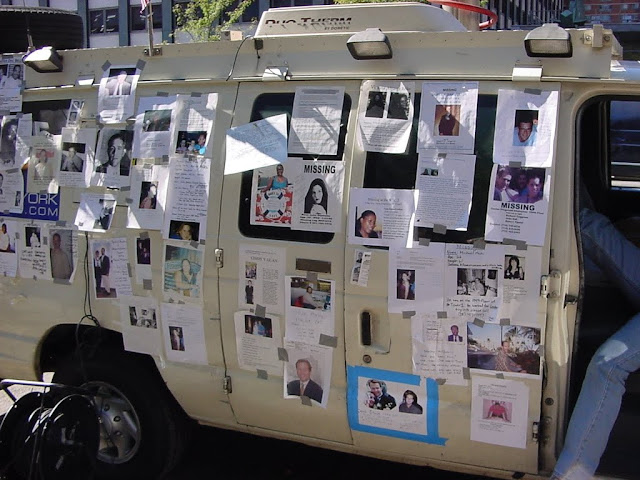 Ask yourself---self, is the following image rational? Doesn't it look more like some college kids on special assignment having a little fun after a boring repetitive chore got to be too much? Did they tramp about in feral packs of 100 or more? How could even 100's of the same been in the same place at the same time? Or was the news media fully in on it too? This news van looks like it's had a newlywed prank played on it. And these were supposed to be seriously grieving family members? Ha! 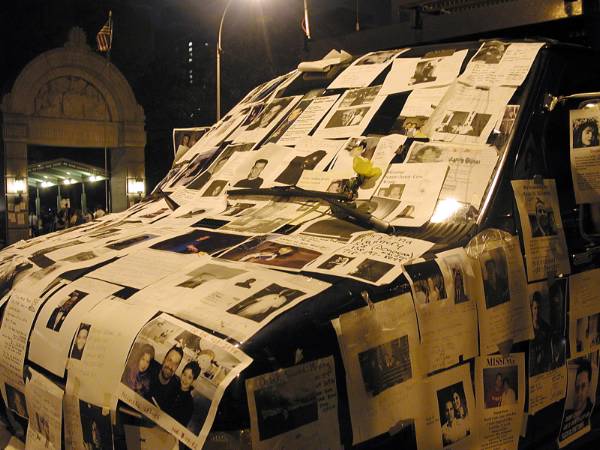 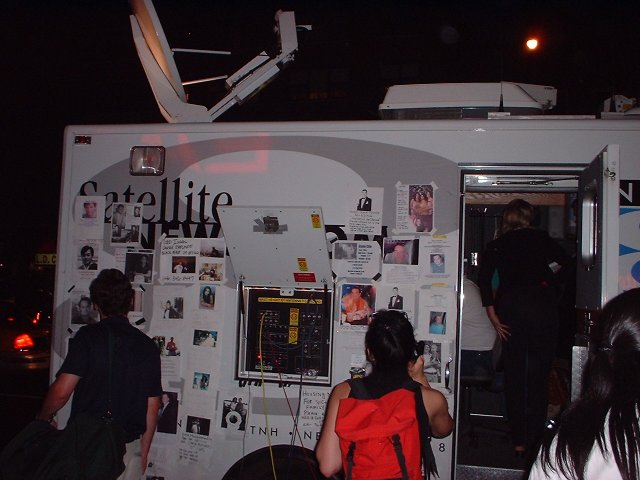 Posted by StevenWarRan at Wednesday, February 10, 2010